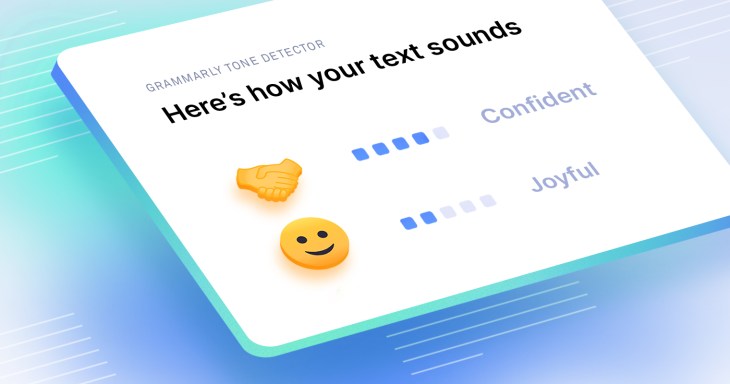 In recent months, Grammarly started expanding beyond its core grammar and spellchecking tools by adding features like a more detailed clarity score, for example. Today, it’s expanding on this work by launching the first beta of its new tone detector that makes sure your email or document sounds just like you want it to. You may want to sound friendly and approachable, for example, but not too informal.

The company says the new tone detector relies on both some set rules and a machine learning algorithm that looks for the signals in a text that contribute to its tone.

Overall, this looks to be a pretty useful feature, especially if you tend to struggle with getting the tone of your emails just right (I definitely know some people who are great in person but whose every email reads like they are accusing me of poisoning their dog). In total, the new feature can detect 40 different tones, covering a range of emotions from “appreciative” to “confident,” “formal,” “informal,” “thoughtful,” “loving” and “sad.” The feature will kick in once you write more than 120 characters.

The beta version of the tone detector is now available in Grammarly’s browser extension for Chrome, with Safari and Firefox support coming soon. Right now, this only works for emails in Gmail and Yahoo, though. Support for all text fields will roll out soon.

Spotify's app for artists gets a big revamp, adds real-time stats for any song