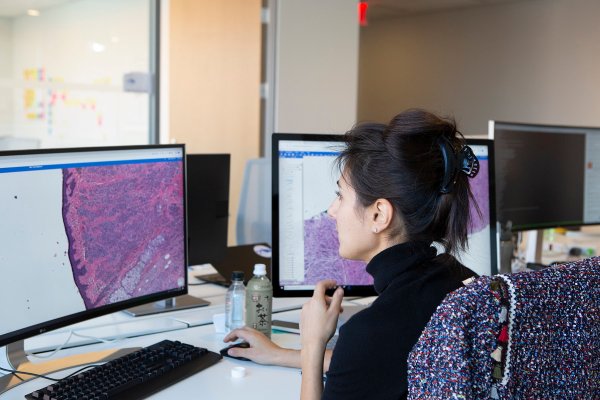 Researchers associated with Memorial Sloan Kettering Cancer Center and medical tech and computational pathology startup Paige have published a new article in the peer-reviewed medical journal Nature Medicine detailing its artificial intelligence-based detection system for identifying prostate cancer, skin cancer and breast cancer, which the company says achieves “near-perfect accuracy.” The tech described in the article, which employs deep learning trained on a data set of almost 45,000 slide images taken from more than 15,000 patients spanning 44 countries, is novel in that it can eschew the need to curate data sets for training first, which greatly decreases cost and time required to build accurate AI-based diagnostic tools.

Last February, Paige announced $25 million in Series A funding and a partnership with Memorial Sloan Kettering Center (MSK) to gain access to one of the largest single repositories of pathology slides in the world. MSK is also home to the lab of Dr. Thomas Fuchs, Paige’s co-founder and chief scientific officer, and possibly the world’s foremost authority in computational pathology.

Paige’s approach uses much larger data sets than are typically employed in AI-based diagnostics, but without the tight curation that focuses other efforts much more narrowly on specific types of cancer diagnostics. The result, according to the company, is not only better performance, but also a resulting system that is much more generally applicable.

Next up for Paige is to commercialize its technology, which is something it’s already pursuing. The work described in the article published in Nature Medicine has already been employed in technology currently under review by the FDA, albeit for a differ

How startups can leverage elastic services for cost optimization

Google’s new feature will help you find something to watch