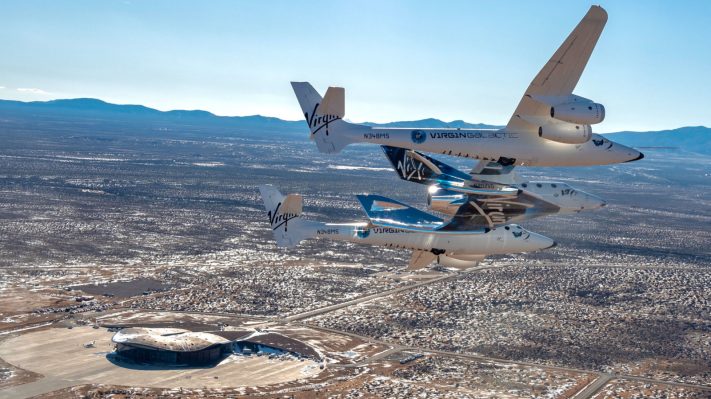 Virgin Galactic is one crucial step closer to actually flying paying customers to space: The space tourism company just relocated its SpaceShipTwo vehicle, the VSS Unity, from its Mojave, California manufacturing facility to Spaceport America in New Mexico, where it will begin flights with a goal of at least sending company founder Richard Branson to space during the year of his 70th birthday.

VSS Unity made the trip attached to the carrier aircraft that will bring it up to its launch altitude, where it’ll detach from the plane (named ‘VMS Eve’) and climb to the edge of space, providing the customers on board with “several minutes” of weightlessness in near zero-G when the spacecraft’s rocket motor disengages at the peak of its journey.

The 90-minute experience will cost the first tourists around $250,000 per ticket, which sounds steep but will also be the most affordable way that anyone’s experienced a trip to space to date. Those ticket holders will still have to wait a while to enjoy the trip they’ve been waiting on for a few years now, however – this relocation sets up a final round of testing on the spacecraft and its carrier planet that will still take some time to complete.

This round of preparation includes a number of relatively unexciting “captive carry” flights with the spaceship and carrier aircraft attached to one another to get familiar with the surrounding airspace, as well as tests of rocket powered flight for the VSS Unity on its own. Finally, teams will assess and finalize the spaceship’s cabin and the overall customer experience that tourists will encounter throughout their quarter-million dollar trip.

Given the not insignificant list of remaining activities prior to an actual flight, expect the inaugural commercial journeys of VSS Unity to still be a little ways out. As mentioned, the company has said that it is prioritizing a trip for Branson during his 70th year, but depending on

This co-op wants to put money back into patients' hands

Apply to the TC Hackathon at Disrupt Berlin 2019